Men deserve to look and feel their best, too, and statistics show that the number of male patients seeking cosmetic enhancement increases year after year. Miami Beach, Florida plastic surgeon Dr. Jose Rodríguez-Feliz shares the treatments and procedures men are requesting most.

Facial contouring
Chiseled facial contours are an inherently masculine trait, and many men desire enhanced definition in the form of a more streamlined nose or a stronger chin. Rhinoplasty and chin implants are among the most popular procedures used to improve the profile and facial contours. A double chin is a very common concern for men as well, and Kybella is an injectable treatment that can permanently eliminate a mild to moderate pocket of persistent fat. Those with a larger amount of submental fat beneath the chin are usually better candidates for neck liposculpting, which can also help define the jaw line.

Blepharoplasty (eyelid surgery)
The natural aging process affects the appearance of the eyes in women and men alike, and many male patients turn to blepharoplasty to help them look as young as they feel. This surgical procedure can address excess, droopy skin on the eyelids as well as the age-related shift in fat that can cause puffiness and undereye bags. Recovery is relatively quick, incisions are invisible once healed, and skilled plastic surgeons with eye-area expertise strive for a natural, rested appearance that leaves patients looking like themselves, but better.

Facelifts
Male facelift techniques are similar to those used in women, however there are a few key differences. Men tend to have thicker skin, and most desire subtler results to avoid looking like they’ve had anything “done.” A male facelift focuses on the lower face to eliminate jowls and enhance the jaw line, and the neck is commonly addressed at the same time. Men also tend to have a deep pocket of fat behind the chin that is usually reduced to achieve an overall rejuvenated appearance, and incisions are strategically placed behind the ears so they are unseen once healed.

Injectables
Botox is becoming increasingly more popular with men to relax lines and furrows around the eyes, between the brows and across the forehead. The main differences between using Botox in male and female patients is that men often require a higher dose due to stronger facial muscles, and most insist on some degree of movement rather than a frozen appearance. Injectable fillers are frequently used to smooth the nasolabial folds (the “parentheses” on the sides of the mouth), add definition to the cheekbones and jawline, and improve a hollow appearance under the eyes or in the cheeks as well.

Hair restoration
Hair-restoration techniques and technology have advanced by leaps and bounds, and today’s options provide permanent results without obvious “plugs” or a large incision on the back of the head. Follicular unit extraction (FUE) is current technique of choice and it involves taking small clusters of just a few hairs from a donor area and transplanting them to bald or thinning areas. Although it can take up to year to see the final result, significant regrowth is visible after about six months.

Liposuction
Men want to see results from the hours they spend in the gym, and stubborn fat often gets in the way. Many male patients are interested in liposuction on their hips, flanks and abdomen to eliminate fat, reveal their hard-earned muscle definition and achieve an overall slimmer physique that allows them go shirtless with confidence.

Gynecomastia
Many men have excess fullness in the chest area that can resemble female breasts—and have an impact on self-esteem. Liposuction and specialized surgical techniques can be used to reduce excess fat and glandular tissue to restore a more masculine-looking appearance. 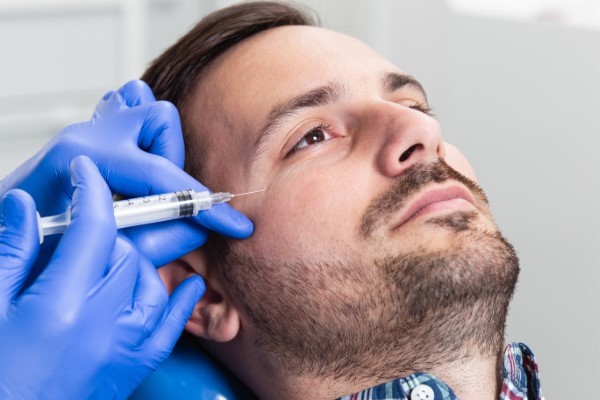 Follow us and stay tuned for
updates and more information